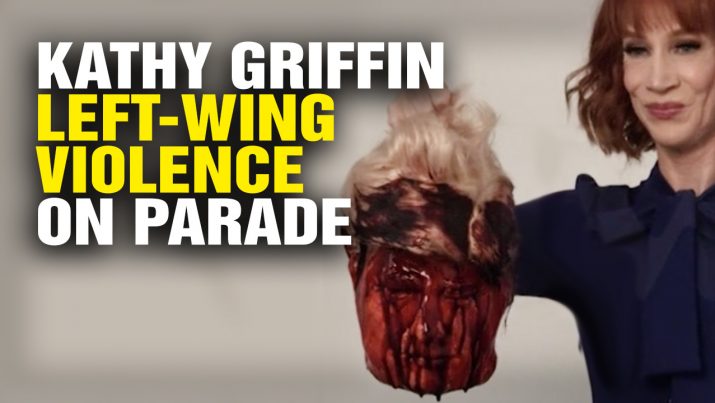 And now the full lunacy of the deranged, violent Left is on display for the world to see: “Comedian” Kathy Griffin posted a video of a bloody, decapitated head of President Donald Trump, providing yet more vile, hate-filled “fresh meat” to the lunatic Left which is already deranged beyond belief.

There’s no other way to say it: Kathy Griffin and the deranged, lunatic Left are mentally ill and pose a very real danger to society. This wretched, terrorist-style beheading video posted by Griffin encourages deadly violence against Trump supporters and sends a message that murdering political opponents of the intolerant Left is a normal, acceptable activity.

Podcast Transcript: “It really is sick what Kathy Griffin has done here with this beheading of Donald Trump and showing his bloody decapitated head in this video. It is beyond sick. It is demented. It is mentally ill. Kathy Griffin should be arrested and incarcerated for advocating the killing of the President of the United States of America. She sums up the incredible derangement – violent lunacy – of the deranged Left, which has now demonstrated again and again that they are incapable of participating in a civilized society. This is really the final straw. This is the Left showing what they really want. They just want to murder President Trump and all of their supporters…”

Kathy Griffin reveals the deranged, violent INSANITY of the Left from NaturalNews on Vimeo.