Why This All Ends in CIVIL WAR (Video) 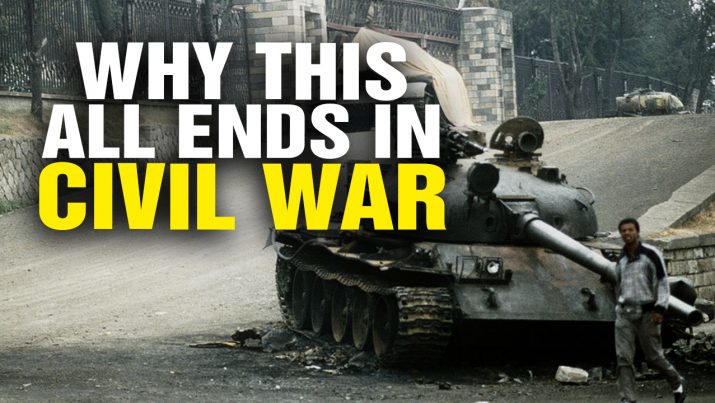 The extreme polarization of the U.S. citizenry can only lead America to civil war as the delusional Left refuses to embrace reality. All that’s necessary now is a catalyzing event, and the extreme, violent Left will unleash mass bombings, violence, arson and more.

The civil war draws near.

Podcast Transcript: “We’ve reached a very dangerous time for our country and our cultural. I know this, because I’m seeing some more red flags. Perhaps, you’re seeing them too. One of them for example: I’m hearing from people in the independent media, leaders and writers who run websites – of course I’m one of them too – so I’m hearing from some of them, that they are now resigned to the fact that it’s just headed towards collapse. There’s nothing that any of us can do. We have tried for a very long time to wake people up and educate people to reform the system in a rational way to prevent the debt collapse – on and on in so many areas. But even the optimists in the independent media are now saying, “nope, we’re screwed. This is can only end in collapse and disaster. This is not going to end well. No question about it.” But the other thing I’m also hearing is a sense of desperation among people on both sides of the political spectrum who say they give up too, because they can’t talk to the other side…” Listen to the full podcast:

Stay informed at CivilWar.news and Collapse.news

Why this all ends in CIVIL WAR from NaturalNews on Vimeo.