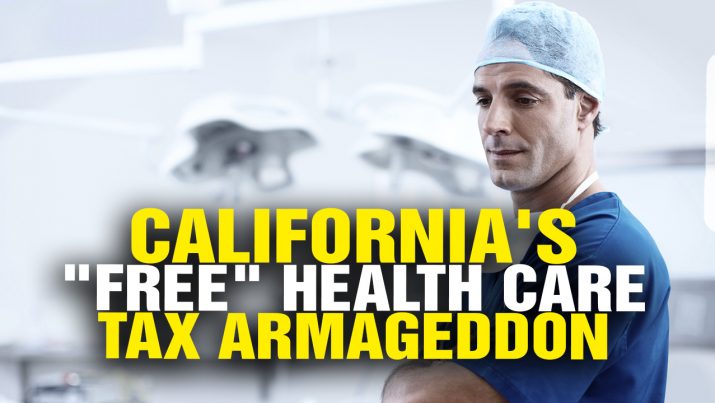 California new “free” health care system will require the state government to raise taxes by almost 300% across the board to TRIPLE its confiscation of money from taxpayers.

Podcast Transcript: “”We have arrived at a beautiful teachable moment in the minds of liberals who want everything for free. The California state wants to provide a sort of state-run universal health care system. Where everybody can just go to the doctor anytime they want. Everybody’s covered including illegal aliens and the State pays for everything. There’s no restrictions, there’s no waiting period, there’s no pre-existing condition exclusions, nothing. It’s like it’s the ultimate utopian, Left-wing, health care system. Now, there’s only one problem with this health care system … the current State budget of the entire state of California – that is everything that the government of California spends in one year – is about a hundred and seventy something billion dollars. You got that? 170 billion. Probably $180 next year. This universal healthcare system that these people in California want to roll out, including the lawmakers, would cost the state four hundred billion dollars a year. In other words, like almost three hundred percent … Well, I mean more than double the current state budget. Let’s just put it that way. So, all of the taxes that California currently collects in order to fund its current operations, would have to triple in size in order to cover this Universal California health care system…” Listen to the full podcast below:

California must raise taxes 300% to pay for “free” health care from NaturalNews on Vimeo.