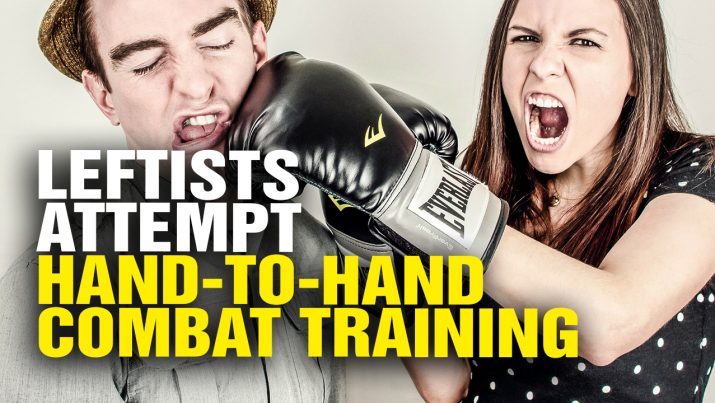 Anti-Trump leftists are now posting even more video comedy that depicts them attempting to train in hand-to-hand combat. They can almost achieve an actual push-up! Weak, pathetic panzies now think they are COMBAT NINJAS!

Podcast Transcript: “Do you remember that video that came out a couple of months ago showing I guess resistance leftists – you know left wingers – who are anti Trump-ers and they think they’re part of the new resistance? They were training with firearms out in the desert – I think in Arizona somewhere maybe near Phoenix. The video was so hilarious that all of us who are proficient in firearms dubbed it the ‘which end goes bang video,’ because the leftists’ were so incredibly incompetent it was just hilarious. For example, they would have targets in front of them that are just 20 or 25 feet away and they could barely hit them with an AR-15. Now, competent people can hit targets at 300 yards with an AR-15, but leftist Antifa – or whatever they are – can barely hit anything at 25 yards. So, that was a really interesting piece of comedy. I only bring this up, because there’s been another video that came out of leftist training for hand-to-hand combat. It looks like it’s in a park in San Francisco or something like that and they’re talking about how … They’ve got this lispy spokesperson talking – about how they’re training to overthrow Trump and defend themselves against the aggression of right-wingers…” Listen to the full podcast below:

Stay informed at CivilWar.news and Survival.news