The NFL Has Become a DISGRACE to America (Video) 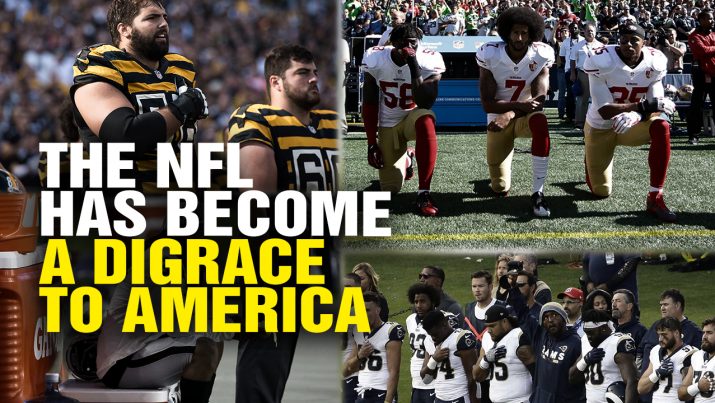 It is now becoming apparent that the real act of courage and defiance in our twisted “progressive” society is standing for the national anthem.

Protesting against America takes no courage at all these days, and every NFL player who takes a knee and refuses to stand for the national anthem is praised and celebrated by the left-wing media and its deranged, anti-American talking heads. Engaging in a “protest” that earns endless heaps of praise from the America-hating Left is no special accomplishment, in the same way that bashing President Trump takes no special courage, either. Everybody on the Left does it almost as a ritual, and the act is more about virtue signaling than any real protest.

What takes real courage these days is to take a stand for your nation. The NFL Steelers player Alejandro Villanueva did that yesterday when he was the only member of his team to stand for the national anthem. Taking a stand and honoring your nation has now becoming the defining act of defiance against an insane, deranged, lunatic Left that despises freedom, despises America, despises police officers and despises elections.

In other words, loving your country is now an act of defiance in our age of left-wing lunacy, intolerance, hatred and division driven by “identity politics” and the cultural poisoning of America.

Podcast Transcript: “So, this kneeling protest by the NFL now is just so disgusting. I understand that everybody has the right to protest, but not at your job. These NFL players, they are the beneficiaries of an amazing nation of liberty. I mean if you think about it, football is a meritocracy – a place where you get fame and fortune based on how good you are regardless of the color of your skin…” Listen to the full podcast below:

The NFL has become a DISGRACE to America from NaturalNews on Vimeo.